At St Mary’s Bryanston Square, the learning of Spanish begins at an early age. In our Nursery and Reception classes, children learn to greet one another in Spanish, count and sing songs.

In Key Stage 1, this continues and in addition, children learn rhymes and begin to listen to familiar stories, translated into Spanish. Throughout Key Stage 2 (years 3-6), Spanish is taught as a discreet curriculum subject. Children learn to speak, write and read Spanish and in addition learn about the culture and traditions of some Spanish speaking countries.

At St Mary’s, we take an active approach to learning Spanish. Throughout Key Stage 2, children receive a 40 – 50 minute Spanish lesson each week where they have the opportunity to learn new vocabulary and phrases, practise their spoken Spanish and as they progress throughout Key Stage 2, children are expected to read and write in the language as well.

We use interactive dual language books to enable children to use strategies they learn in literacy, to decode Spanish texts. In addition, we use songs, role play and games to reinforce vocabulary which in turn, enables children to become more confident Spanish speakers.

At St Mary’s Bryanston, we teach the children to know and understand how to, ask and answer questions, use correct pronunciation and intonation, memorise words, interpret meaning, understand basic grammar, use dictionaries, work in pairs and groups to communicate in Spanish and look at life in another culture. Children are taught to develop their listening skills through understanding and responding to authentic spoken language, this includes video conferences with our partner school in Valencia, Spain. Accuracy in pronunciation and intonation is developed through conversation and speaking and listening activities. Pupils learn about grammatical features such as masculine and feminine nouns and learn how to build sentences. Children also learn songs, poems and rhymes that help them to understand the cultural practices and festivals of Spain and other Spanish speaking countries.

Parents can help by encouraging children to share the vocabulary and songs they learn in Spanish at home as well as practicing the new vocabulary that is included in the weekly Family Update.​ 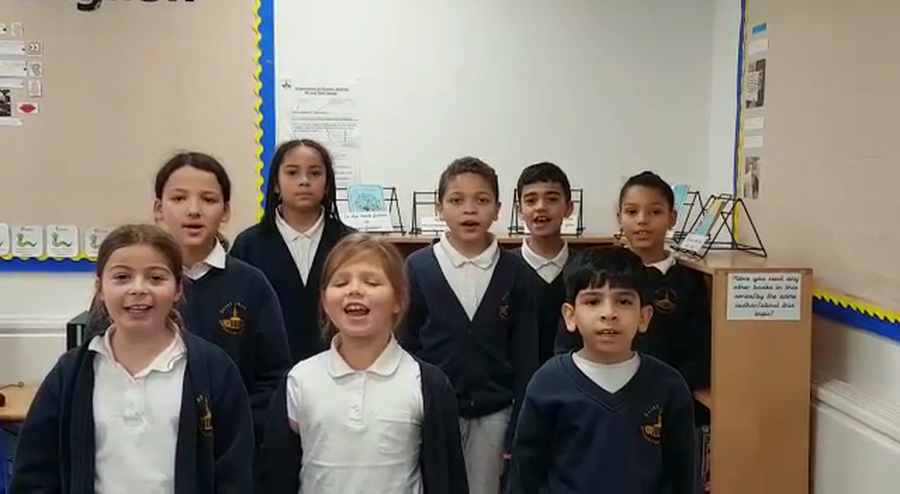 Why we teach Spanish

How we teach Spanish

In the Foundation Stage (Nursery and Reception), children will be introduced to rhymes and stories in Spanish. They will hear familiar English language stories, in Spanish. Children will learn to count to 10 and begin to learn nouns relating the classroom environment and to use common greetings.

All children in KS2 will have regular language lessons using a bespoke scheme designed with the school’s intent in mind. The Modern Foreign Languages curriculum has been designed, to develop not only children’s fluency with language skills, but also their love of learning a language. It progressively develops language skills, through weekly taught lessons. This allows the children to acquire new language then use and apply it in a range of different scenarios and topics. Children are encouraged and supported to develop their speaking and listening skills through conversational work, singing activities and games. As their confidence and skill grows, children record their work through pictures, captions and sentences. Children will be given the opportunity to speak to and write to children in a partner school in Valencia, Spain, using video link as well as traditional letters and cards.

Annually, we mark European Day of Languages (in September) in assemblies and have a focus on languages and language acquisition, as well as cultures and traditions around the world, during International Week each March.

Our MFL curriculum will ensure all pupils develop key language learning skills set out by the national curriculum, as well as a love of languages and learning about other cultures.

The language skills are as follows: